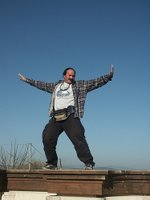 Our last day. Cosi revaya--my cup runneth over--and there was more. In the morning we visited the restored town of Zichron Ya'akov, home of the "first aliyah," where Zionism began in the 1880s with a bunch of incredibly heroic pioneers. In the afternoon we headed to the architectural site of Tzippori and the synagogue where the Mishnah, the Oral Law, was compiled. I was kind of numb with awe. I tried to imagine sages stroking long beards while pacing floors covered with mosaics of Jewish and Roman symbols (they had no trouble living with and borrowing from neighboring cultures). Maybe they took a break occasionally from deep thoughts to look across the hills at towns and valleys rolling in green and sunlight as far as the eye could see, all the way to Nazareth. (The photo at left is of our tour guide demonstrating what might have happened on the stage of Tzippori's two-thousand-year-old outdoor theater.) 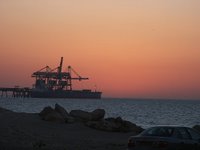 We planned to be at Caesaria at sunset, by the water where Hannah Senesh wrote "Eli, Eli":

"My God, my God
May these things never end:
The sand and the sea
The rustle of the water
The lightning in the sky
Man's prayer."

But just as we got on the bus, a group of men began to ask around for a minyan for minha, the afternoon service. And some of the men in our group obliged, of course, as the women waited off to the side. This happened a few times during our trip, a common sight in Israel. I much prefer the kind of world where I'm counted. The service ended and we tried to race to Caesaria, arriving just as the fat orange sun dropped past the horizon with the suddenness of a bowling ball. We got out and sang for awhile in this beautiful place, and then drove Ne'ot Kedumim, a "Biblical landscape preserve"--gardens and flowers written about in ancient texts--which we couldn't see at all, since it was night. But it didn't matter, because we were there to talk--about what we learned from this trip, and were bringing back--and eat, a final dinner under a big tent, where we danced, sang, cried, and each offered a single word of prayer that, knit together, became one of the best I've ever heard.

A few hours later I got on a plane and emerged in New York the next morning, dazed and tired. (And without my luggage, which returned five days later from destinations unknown. I guess it didn't want to come home, either.)
Posted by alto artist at 11:57 AM

It must have been so difficult to leave... when will you return? :)

Your "entertainment" guide looks like he is enjoying himself. I love the picture of the sunset,the start of another day. Perhaps it was meant that you arrive there at sundown.....if only to capture that image.