Mon., 1/1
I could scarcely believe the trip was almost over. The week felt like a lifetime. 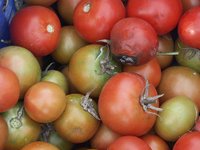 Today's theme was service to Israel. We learned that tzedakah (charity), the center of a Jewish life, is paradoxically less so for contemporary Israelis, who grew up in a culture valuing strength, defense, growth--but not necessarily giving. In the morning we joined Table to Table, a food rescue organization, at a farm to pick tomatoes not collected during the harvest and slated to rot on their vines. Benaya, our tour bus guide, sung off-key at the top of his lungs as he worked; I was afraid his voice would kill the produce. Benaya's exploding excitement was infectious as he helped us see the land through passionate, critical, and extremely knowledgeable eyes. (As "bus boss," official attendance-taker, I had a great time helping him yell into the microphone all week long.) He was very funny, better than coffee at keeping us awake, and as rooted to this place as a tree.

That afternoon back at the hotel we met with young IDF soldiers, including a rabbinical student, a woman of 25. Her job in the army was to help soldiers convert to Judaism. We were confused; isn't everyone in the army already Jewish? Yes, according to the state, which requires that one's father be Jewish. But halakha, Jewish religious law, calls for martilineal descent. Many immigrants from Russia, new to Israel and identifying completely with heritage for which they had been persecuted back home, join the army and are suddenly an underclass--not really Jewish. Such is the tangle of identities in Israel.

Afterwards we headed to Rabin Square, the site of his assassination ten years ago, and listened to one of our guides speak with grief and anger about the wrenching loss of hope on that day from which the country has never recovered.

We lit candles back at the hotel lobby for the final evening of Hanukkah. Then friends and I took a cab to Old Jaffa for a magnificent dinner at a little Italian/Moroccan restaurant, followed by a sublime dessert of warm, fudgy chocolate cake at a café overlooking the water and lights of Tel Aviv.
Posted by alto artist at 9:21 PM

Your paragraph about Benaya is priceless, a smile in a day that had threatened to be insufferable. Thanks!

Thank you!--I'll post a photo of him in my next post, one which makes me laugh every time I look at it.
--aa.

I am so happy that you are sharing your trip wuth us, aa.. you tell it so well I feel like I was there with you!

It must be odd for them, those who immigrated to be a "citizen" so to speak, but not belonging......hmm...Loved Benaya too.....sounds like a happy man!