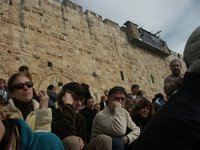 Shaharit at the Southern Excavations of the Wall, where I had the privilege, one of the most enormous I will ever have in this lifetime, or any other, of chanting Torah. This remaining part of the Temple stands perpendicular to the Kotel, the Western Wall. From a little table covered with a tallit that served as our bima I looked up and saw the blue sky, and below that the stones of the wall, and below that the faces of my friends. And below that, the words and letters on the scroll. I thought of those images of the earth from space where the camera zooms closer and closer until what looks like a speck of color turns out to be a whole country, then a city, then a house. Every small thing is part of a universe much larger, and vice versa. As I read, the words in the scroll seemed to lead the yad (the pointer) through each sentence like stones on a path, going by so fast I almost couldn't keep up. I had a sense, in that minute or two of reading, that the letters were having fun, dancing, taking me somewhere unknown and joyful.

Here on the steps of the gate through which pilgrims once entered the Temple I read the portion for Hanukkah about offerings brought to the tabernacle, and so was able to give my own.

Afterwards we had some time at the Kotel itself. It's much smaller than I imagined, as is everything in this country. I touched the stones, cried, watched pigeons nestle in two-thousand-year-old crevices, absorbed the fervor of everyone around us--but the Southern Excavations seemed holier to me, where I was able to stand together with all my friends, both men and women, without a barrier between us. I don't know how to pray other than with my entire community. 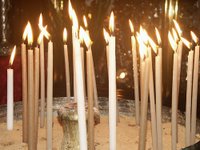 Jerusalem is a city of many different kinds of walls, I guess. After a meandering walk though the Jewish and Arab markets, the Via Dolorosa, and a visit to the Church of the Sepulchre (photo at left), we stopped for 20 minutes of the best falafel I've ever had in my life. Then back on the bus to the Shrine of the Book at the Israel Museum, site of the Dead Sea Scrolls. The lettering on each fragment is tiny and exact, as if each word and mark describes a particular life. I can't really comprehend that kind of oldness. But I think I was even more awestruck by the 10th century Aleppo Codex, the earliest known manuscript containing the full text of the Bible--and trop, cantillation, the notes to which we chant. That book was why I was able to do what I did earlier that morning.

The day ended at Neve Shalom/Wahat al-Salam, a village where, for the last few decades, Israelis and Arabs have somehow managed to live in peace. We listened to their extraordinary story, watched a strange but entertaining 2-man play, and then returned to the hotel, where (even after a huge cup of Turkish coffee) I slept very, very well.
Posted by alto artist at 7:47 PM

You need to title your trip the Falafel Journals" or something....can you top this falafel...?? I can not imagine seeing those stones and the text, the text would have thrown me...and I am a stone person...rubbing and touching, trying to osmos whatever lies within it.