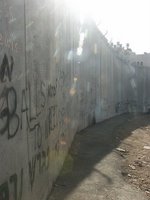 Our final day in Jerusalem began with a tour of East Jerusalem and the "separation barrier" with a representative from Ir Amim ("City of Nations" or "City of Peoples"). Again, I was struck by how small this country is. You can almost hold it in your hand, the conflict visible at a glance from any hill--Jews here, Arabs there. War over a piece of land that could be someone's backyard in Texas, if Texas happened to be the holiest site in the world for three religions. We learned that much of the barrier separates Palestinians from Palestinians, not Jews, and that its perimeter was determined by politics and gerrymandering. We were shocked at the sight of streets filled with garbage; although East Jerusalem falls within municipal boundaries, it's mostly neglected in the budget. We watched a pregnant woman squeeze though an opening in the wall, unseen or ignored by a guard with a gun just a few feet away. I understand why the barrier is needed, and also don't understand. It's very disturbing and complicated.

We drove to Tel Aviv, an entirely different world, landscape, and political climate less than an hour away. More great falafel for lunch and an hour speed-shopping at the Nachalat Binyamin crafts fair, my favorite sort of place, where everyone was pleasantly rude.

Then a most amazing Kabbalat Shabbat with a number of local congregations--many of them secular, people who get together for study and community service, but without the religious part. Which makes complete sense here; it's all or nothing. Even "nothing" in New York tends to include forced tenure at Sunday School, or Yizkor once a year--but in Tel Aviv, where public schools close for Hanukkah, a Bar Mitzvah is just a party. Religion is state sponsored, and has no middle. I never really understood how lucky I was to be an American Jew, with the freedom to explore any number of shades of gray. That Friday evening we watched the Israelis' joy unfold during the service like light reflecting off a precious jewel, and we danced and sang for hours afterwards. What a wonderful gift we were allowed to share. One of our security guards, a large stone-faced guy, said afterwards that he always felt Israeli but never Jewish until that Shabbat, and cried when he saw the Sefer Torah being taken out of the Ark the next morning.
Posted by alto artist at 12:03 AM

Wow- your trip, aa, sounds so amazing. Fruitful and inspiring... you must feel like you have lived a thousand lifetimes now that you have gone to Israel!

p.s.- thanks for your kind comment on my blog as well. It's been a haul but I finally feel that this is the right thing to do and the right time to do it. Please keep me in your prayers...