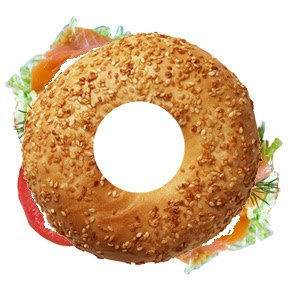 Purim was a blast. My costume was a hit (see photo at left; imagine a face in the hole and bar of cream cheese hanging from a string around the neck attached to the face), and chapters 4, 5 and 6 proceeded without a hitch. I also now know that I'd be just fine if ever dropped in the middle of Madison Square Garden during a circus and asked to chant. I walked up to the bima, looked out at hundreds of alien heads and people dressed like inanimate objects and a half dozen little girls in princess costumes darting underfoot, and understood how middle-school substitute teachers must feel. It was a little scary (I started in too low a key and forgot to breathe, as a result, and sounded ragged--although I doubt that half the ADD-inspired room could even hear me) and much fun. Which describes Purim: ridicule everything and everyone and in the process acknowledge the truth, sometimes dark, always hidden, behind your laughter.

I read again at Sunday morning minyan, this time with barely a beat between chapters (which the night before had been punctuated by shtick, dancing to 80s disco music, etc.). Towards the middle of chapter 5 I had the feeling that my section would never end, that I was just a disembodied voice floating along on a wave of time. By chapter 6 I was sure of it, listening to myself sing as if I were outside of myself, barely visible yet infinitely connected, a sensation I recognized from chanting Torah but here magnified a thousandfold. It disappeared after a second or two. Maybe I was hearing, very faintly and beyond the range of my ears, the music of a million others who were chanting Esther at that very same instant.
Posted by alto artist at 5:31 PM

Glad to hear that it was a success.
Love the costume.