The other day I was running in the park and listening to an audiobook of the brilliant and hysterical Born a Crime, by Trevor Noah. He was musing about his childhood craving for books, and those perfect days when his mother brought home a stash of all kinds: children's books, picture books, encyclopedias, mostly from church basement rummage sales. And he imbibed them like water to a parched boy, which he was.

I, thank goodness, grew up in much safer and economically secure conditions than Noah, but shared that same desperate book hunger. New ones were out of our budget, although I didn't know this at the time. I just assumed that everyone's reading material was worn, dog-eared, and passed down through time immemorial. Our synagogue, like Noah's church, hosted many rummage sales, which went by the grander name of bazaars. On bazaar day, the 60s faux-modern sanctuary was emptied of chairs and old men and instead populated by long, brown folding tables and deep cardboard boxes piled high with treasures: scratched leather pocketbooks with little golden clasps, scarves of unknown provenance, gently worn kitchen utensils, doll clothing, and the motherlode, remaindered paperbacks with back covers only. I'd cobble together whatever was left of my monthly allowance and buy as many books as I could carry. I particularly remember the science and science fiction titles, genres that took over my waking hours starting at age 10, and some other odd finds: We Reach The Moon, by John Noble Wilford. Flowers for Algernon, Daniel Keyes. Isaac Asimov. Something about exploring ocean life in a submarine. I Was the Nuremberg Jailer, Burton Andrus. I would start reading the minute I paid the blue-haired lady with the cigar box, and make my way four blocks home by instinct, since my eyes never left the page.

In 2016 I had a roof over my head, friends, and more than enough to eat; by relative standards, compared to the rest of the world, it was a fine year. But by absolute standards, compared to the rest of my life, it really sucked. I won't count the ways right now (maybe in a future post), but take my word for it. A year and a half later, everything is copacetic—but my books were a major casualty. All those cardboard box discoveries live on in memory only. This is, on the one hand, just fine: I know I can re-read them any time I want, thanks to the internet. But on the other, sometimes I miss looking at those crumbling back covers. I want to rummage through my shelves and be surprised by their existence, just like Trevor Noah when his mother came back from the church basement.

(Yes, after a long drought of words, since all of my creative energy was happily directed towards art, I'm trying to blog once again. I'm hoping for inspiration from the month of Elul, four weeks of preparation for a newly examined, revitalized, and repaired soul. Maybe I can write every day—maybe I can Act, as today's prompt suggests—or maybe not. As Pirkei Avot says, starting is a good thing! So, to be continued.) 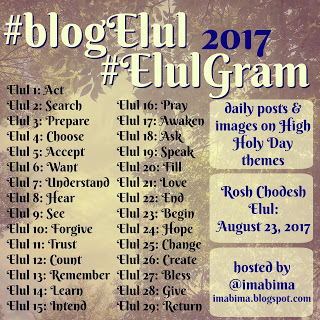