Letters on the scroll

Sometimes they bump together, crowded
little black birds on a wire vying for space, trying to push the last into the canyon
or the end letter stretches languidly, a cat
luxuriating in her ability to expand and touch the edge.

Above the sacrifices,
long tracks like scattered hay dropped for emphasis,
the shadows of a hundred years and a thousand silver fingertips,
remind the letters to keep still, for now.

And the parted sea between them
waits for my eyes and my voice to jump in.

--written mostly on the F train en route to a party in Brooklyn last night. 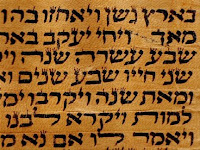 I wish I could go back a hundred years and watch someone reading from the same scroll I read yesterday morning. What did the letters look like to him? (It had to be a man, back then.) Were they stern, happy? Was the parchment bright white? Did this man come from another country, and did the scroll remind him of his Bar Mitzvah, of the life he left behind? I wish the letters could sing back up at me with these stories.
Posted by alto artist at 8:54 AM