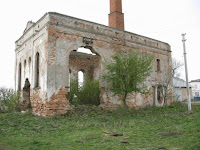 Last Wednesday evening was the beginning of Yom HaShoah and I meant to go to services, I really did. I never have; my usual excuse is that I'm too shul'd out from Pesah, or that I did not personally lose family members in the Holocaust and, well, nothing. I know this last reason is pretty poor. Basically I'm afraid of getting depressed and being unable to stop crying as I listen to the reading of names.

But this year I came closer to going, and I think I'll stop being a chicken by next year. Although I have no proof, I now believe the second reason isn't true. I recently connected with a cousin of whose existence I never knew (at a memorial service, where else?) who's been doing genealogical research about my mother's side of the family. Last summer he and his mother visited the town where my grandfather (and his grandmother) were born--and where my great-grandfather was a rabbi. I had no idea; this was quite an astounding bit of information to absorb. I never thought my family was anything but peasants. My mother never, ever spoke of her grandfather (I hadn't even known his name), who remained in the Ukraine after his five children emigrated to the U.S. I can only guess that she never heard stories from her own father. Perhaps my grandfather had a difficult relationship with his father; my grandfather was the oldest, which comes with particular challenges if you're living in poverty and oppression. I wish I knew.

Or that I had photos of this rabbi, who was the spiritual leader of a large community. My cousin visited the remains of his synagogue (above), the large shell of which still stands in the small shell of a town. My great-grandmother was from England and her family followers of the same rebbe as my great-grandfather's, so she was imported to the (then) Austro-Hungarian empire when time came for him to marry. She became a grain merchant and, apparently, a successful businesswoman. (Is this why my grandfather was a baker?) She died when her youngest, a daughter, was just six; my great-grandfather grew very close to this particular child, and even took the unprecedented stop of teaching her how to read and write. (Interestingly, my mother was also the youngest of five, and my grandmother also died young--but in Queens, not Europe.)

If I look at this photo and close my eyes I can see dark-eyed women in long skirts waiting outside for their husbands to finish praying on Rosh Hashanah and children in short pants playing on dusty, unpaved streets on a hot day, and men in big black hats milling around, davening, swaying, maybe not so differently than I do.

I Googled in hopes of finding more wonderful information, and came to this link:

On September 30, 1942, 1,500 Jews were transported from Probuzhna to the Belzec Extermination Camp.

My grandfather and all his siblings came to America long before then, and I know my great-grandparents were no longer alive by the 40s. But what of other relatives--did my grandfather have uncles, cousins? What of his congregants, friends, the butcher, the butcher's grandchildren? My grandmother's family? All those who who carried their memories? Surely they counted among the Jews sent to Belzec. I don't know their names to read at a Yom HaShoah service, but they're still part of me.
Posted by alto artist at 12:01 AM

Oh. Tears came to my eyes as I read that sentence in blue.

Always on Yon HaShoah, when I taught in a Jewish school, I would look at my students and be so grateful that they were not the young people of 60 years ago, and so heartbroken that many of their grandparents were.

I am saying a prayer for the Jews of Belzec and their descendants,of whom I hope there are some, as I read this.