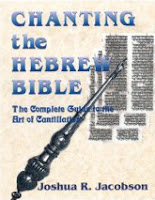 So in a few weeks I'm beginning an occasional hevruta, with my old Torah chanting teacher and a friend also immersed in learning how to chant, to study this massive tome:

Chanting The Hebrew Bible: The Art of Cantillation, by Joshua Jacobson

The book is 965 pages, each packed with passages like:

The level two dichotomy separates the two clauses of submission from the clause of benediction. The level three dichotomy separates the clause of "dropping" from that of "bowing." In the tevir clause the verb is followed by three complements. The terminator tevir is preceded by its conjunctive, merekha; its remote conjunctive, kadmah, and its tertiary remote, telishah.

At present I understand absolutely none of the above. It is, like the "Seinfeld" episode, not merely a coffee table book but the entire table itself. (Actually, the Shulchan Arukh, the "Set Table," an exhaustive 16th century catalogue of Jewish law, isn't a bad comparison.) There's too much information in this veritable Talmud of cantillation for one person to absorb in a lifetime; maybe between the three of us we'll de-mystify a few pages. The marble-slab-like publication has sat on my shelf for a year, mostly collecting dust, except for two months ago when I was chanting a verse (Gen. 5:29) that featured one little word (zeh, meaning "this") mysteriously crowned by two trop markings. How could fourteen notes be stretched across one, count 'em, one syllable? Plus the pairing of those two symbols was like stripes and polka dots--they simply did not go together. I checked a few different sources; all included the two, without explanation. And then one day, the slap-my-forehead moment: aha, Jacobson would know! He did, although finding where in the book took about as much time as it did to learn the entire aliyah. But there it was, on p.417--yes, it's a rare case (three instances in the entire Torah). Yes, sing them both. And so I did, after which people came up to me and said, "Wow! What was with the zeh?"

Why do I want to learn this stuff? What impact does it have one my daily life and the state of the world? I have no idea, but it's fascinating and I can't get enough. I look forward to many other conundrums solved in the course of our possibly endless course of study.
Posted by alto artist at 12:59 PM