I walked across Central Park the other day. This past week has been unseasonably warm, transforming two feet of snow into something like Italian ices mixed with mud. Getting around the Reservoir was slow and sticky, and at 11AM on a Thursday the storybook paths that usually teem with runners and kids on skates were almost empty.

Just as I was marveling at the good fortune of having all this acreage to myself, I noticed a man slipping and sliding towards me on the ice. 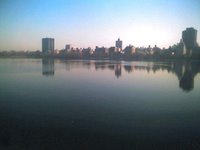 "Beautiful, no?" he said. It was Chaim, a security guard at my synagogue. He belongs in front of a door, peering into people's shoulder bags. It was jarring to see him in the middle of nature, minding his own business. We talked for a few moments, surrounded by melting rivulets that smelled of new soil, and he pointed out few small hills still virgin white. Then he continued on to the West side, and I (after documenting the moment with my camera phone, left) to the foreign East.

My uncles' stories, for some reason, continue to reverberate in my head. If we're all part of a larger song, like the rabbi suggested, maybe theirs was the rhythm in each of my steps as I crunched through snow that morning in the park. Sometimes I fear that being a repository of so many memories will distract me from newer experiences. But then a connection to the best parts of the present, like Chaim on the jogging track around a mirror of water, will appear when I least expect it.
Posted by alto artist at 11:48 PM

Beautiful, aa... I think the past only makes our present more viable and coherent!

p.s. thank you for directing me to that site! :)