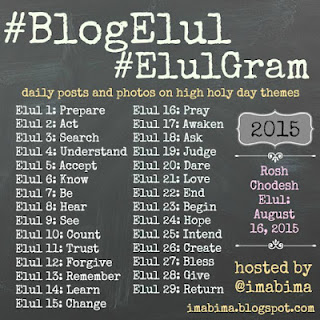 Deja vu... I was here last year at this time, no? Life has continued in the usual way—some good, some (but not too much) bad, some (mostly all) in between, and here we are again. Right now: mostly good! It's a nice way to start the new year.

Today at services the rabbi invited all those who had a goal for the month of Elul to come up to the bimah for an aliyah. He gave us a minute to think about that goal, and I closed my eyes and saw a carousel of intentions, all dancing and vying to be chosen. I opened my eyes and realized I wasn't quite ready to choose, and instead offered a little prayer that Elul itself would lead me to the answer. I happened to be at the bimah already, since I was chanting, which I think was God's way of accepting a compromise. I'm preparing to prepare. It's a start, like this first day of the journey of Elul.
Posted by alto artist at 12:10 AM

Email ThisBlogThis!Share to TwitterShare to FacebookShare to Pinterest
Labels: #BlogElul (2015)