Belatedly, I'm answering the meme that Regina Clare Jane tagged me with last month. Thank you for making me think and write!

What were you doing ten years ago?
I was starting to become myself. I had recently moved to Manhattan, was knee-deep in the nightmare of selling my old apartment, was trying to find the guts to quit a slave-like job, and had just decided to learn something new: rollerblading. And my friend M. was trying to convince me to go to his synagogue, which had cool music and a reputation as a good place to meet other single New Yorkers. I was wary of religious stuff and thought it sounded cult-like, but figured I'd give it a chance one day (it took another year) because M. was a sensible guy.

What were you doing one year ago?
Pretty much the same as now, only less calm. Not a lot less, but every little bit counts.

And I'll add a new question: 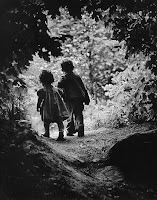 What were you doing a few hours ago?
Walking in Central Park, watching white and yellow light dance in between the lace of green leaves, listening to an orchestra of birdsong, laughter, and rumbling buses. We were in The Ramble, a tamed wild forest ribboned with paths that suggest Victorian propriety about to burst its seams. Even though I rarely visited as a kid, Central Park always makes me feel like a child waiting for the wonderful unknown to peer over the next hill. I kept thinking of one of my favorite books, Robert Louis Stevenson's A Child's Garden of Verses, about a boy and girl who test the limits of their dreams but always end up safe at home, tucked in bed. Or the W. Eugene Smith photo from The Family of Man, the book of the famous 1955 MoMA exhibit, of two children holding hands and walking into sunlight. In Central Park I'm always ten years old.

Five songs to which you know all the lyrics:
Every Beatles song ever written. Not kidding. Also "Si, ch'io vorrei morire," by Claudio Monteverdi.

Five things you would do if you were a millionaire:
Pay off my mortgage
Start a charitable foundation
Give money to a couple of friends who really need some
Take a long vacation to a tropical island where I can lie on the beach and sip mojitos as a handsome, skimpily-clad man fans me with a big ostrich feather
Go to Israel (wait! I'm doing that anyway!)

Five things you like doing:
Singing
Creating art
Writing
Praying
Enjoying the company of my friends

Five things you would never wear again:
Can't answer this one, because who knows what the winds of fashion will bring, or my own peculiar tastes will become obsessed with. After all, yesterday's platform shoe is... today's platform shoe. (OK, maybe next year's.)

Five favorite toys:
My Treo 680
My ancient but wonderful Minolta Dimage digital camera
The old Mac laptop I use just for writing
My A440 tuning fork
My two cats
Posted by alto artist at 4:54 PM

Oh, just splendid- it's amazing how simple little questions can take us back to long gone places... somehow, 10 years ago doesn't seem that faraway...
Lovely answers and thanks for playing, aa...